Rough draft of a manuscript for the Sabbath morning sermon at Green Lake Church of Seventh-day Adventists, May 28, 2016. 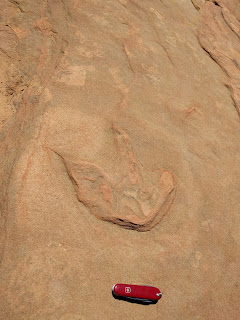 A couple of weeks ago along with the other Green Lake Church members I was bouncing up a sandy track in southwest Utah. The driver of our 4-wheel drive pickup was Gerry Bryant, Elyse’s dad.
The truck fishtailed in the soft sand. In a couple of places I could feel the wheels digging in and I wondered if we were going to have to get out and push. (We had to the last time I was here with Gerry.) After a couple of miles we parked  and piled out. Ahead of us was a broad swale cut in the sandstone. As we walked from the sand onto the sandstone, we noticed the patterns of fine lines crisscrossing the rock. Cross bedding, it’s called. The tracks left by ancient dunes.
But these crossbreeding lines were not what we were here to see. In southwest Utah you see those lines everywhere. The ancient dune field covered 2000 square miles and crops out today as rock called the Navajo Sandstone. This is the rock that forms the famous cliffs of Zion National Park and the unnamed cliffs you see everywhere in the post of Utah.
The reason Gerry had piled 14 people into a pickup truck and driven 2 miles through soft sand was other lines. It took only a minute or two to find these other lines. The outlines of dinosaur feet!
In this swale cut in the sandstone there were hundreds of dinosaur tracks. Some were 9 out 10 inches long. Some were beautifully preserved, as plain as a deer print or dog track left in soft mud. Others were more obscure, but the longer we looked, the more we found.
In this part of Utah, there are no beautifully preserved dinosaur specimens. No dinosaur bones. No dinosaur eggs. No coprolite. But we know the dinosaurs were here. The tracks bear witness.
Gerry has turned me into a dinosaur track hunter. When I’m in Utah, I’m obsessed with hunting dinosaur tracks. I spent most of two weeks, constantly on the lookout for more tracks. And sure enough, once you start looking, you see them everywhere. Apparently, dinosaurs had a hard time hiding their tracks.
They were not trying to leave a record of their adventures. They just walked around, and now we, eons later,  come along and read their tracks.
Look, this one was walking up a dune. You can see where every step its foot slid backward a bit. Here you can see where dinosaurs gathered because there are tracks on top of tracks.
After spending two weeks obsessing over ancient tracks, today’s sermon practically wrote itself. Tracks. We all leave tracks. Let’s make tracks we would be proud to have someone else read.
Our Old Testament reading says,

Let us hear the conclusion of the whole matter: Fear God, and keep his commandments: for this [is] the whole [duty] of man. For God shall bring every work into judgment, with every secret thing, whether [it be] good, or whether [it be] evil. Ecclesiastes 12

Either make the tree good, and his fruit good; or else make the tree corrupt, and his fruit corrupt: for the tree is known by [his] fruit. O generation of vipers, how can ye, being evil, speak good things? for out of the abundance of the heart the mouth speaketh. A good man out of the good treasure of the heart bringeth forth good things: and an evil man out of the evil treasure bringeth forth evil things. But I say unto you, That every idle word that men shall speak, they shall give account thereof in the day of judgment. For by thy words thou shalt be justified, and by thy words thou shalt be condemned.  Matthew 12

I used to think of judgment as a warning that God was worth a hypercritical eye. I now read these same words as a reminder that we leave tracks. Always. Everywhere. To live is to create tracks. Remembering this can help us to live wisely.
Wise living is living today in such a way that tomorrow I’ll still be glad about what I did today.
I recall a country song that tells the story of a young man who did something stupid and ended up in front of a judge. The judge asks, “What were you thinking?” The young man ponders, “What was I thinking?”
What was I thinking? Obviously, if he had been thinking, he would not have been so stupid. He left a track that he himself was embarrassed to see in the light of day.
God will bring every work into judgment, with every secret thing, whether it be good or evil.
We make tracks. The tracks can be read. The tracks WILL be read. Let’s make beautiful tracks.
On this trip I met people who have left beautiful tracks.
I met Kevin Lilly more than thirty years ago. He was new to the church, fresh out of school and on fire for God. After a year or two the church made him an elder. To this day he remains the indispensable elder in that congregation. Pastors come and go. Church bureaucrats come and go. Kids grow up and move away. New people come. New families join the church. People get old. Kevin has been the steady source of wise, kind leadership for three decades.
When the history of the Babylon Church is written, an entire chapter will be devoted to the service of Kevin Lilly. Of course, he has not served alone. Other people, Carol and Bonnie, and many others have lived out the values of Jesus in that small church community in Suffolk County.
The same kind of story could be told of Gerry, our tour leader. He’s a professor of geology. He’s run his own business for decades. And he and his wife, Debbie have been the indispensable people at the center of the little congregation in St. George, Utah. Pastors have come and gone. A few of them did better service by leaving than by coming. (Alas!

) Through three decades Gerry and Debbie have cared for people, have held together this small community of Àdventists.
They have left beautiful tracks.
We all leave tracks. Let’s be intentional. Let’s make beautiful tracks.
One evening around the campfire, one of the young people told a story of getting fired. Actually it was his wife who got fired, and at the time, it was her career which was the center of the family dreams. It was devastating. He told of a kindness shown then by some older church folk, people like Kevin and Gerry. When I checked with those people they had no memory of doing anything. They had been completely unaware of making any tracks.
Still the tracks were there, beautiful tracks.
Most of us do not know the name of the person who was the visionary responsible for the building of this church. I know his name. I’ve met his children and grandchildren and great grandchildren. But he is not a living person in my mind. I have no mental image of him. But every week when I walk through this room I see his tracks.
I don’t know who created the Adventist tradition of Sabbath School. But when I poke my head in the library or kitchen or fellowship hall at ten o’clock and people engaged in conversation about God and life and the Bible and faith, I see the tracks of someone who insisted that spiritual life and thinking about spiritual life belonged to all of God’s people not just the clergy. Beautiful tracks.
Jesus, as always takes the Bible doctrine of judgment and radicalizes it.
Words.
Instinctive, unconscious actions.
Let’s cultivate goodness so that it becomes natural.
Working with Gerry, I’ve learned to read very obscure tracks. I hung and record vague weeks in the rock that experience has taught me are dinosaur tracks. But when people ask to see my pictures, they are disappointed.
But in St George there is a museum. A farmer was doing some excavation. He turned over a giant slab of sandstone and found on the underside beautiful dramatic dinosaur tracks. There were more. Eventually they built a museum over the site. It’s an amazing place. They are amazing tracks, worth the price of admission.
May God grant that we in our living and speaking create tracks worthy of a heavenly museum. May we be indispensable people, marking the world with beautiful tracks.

This entry was posted in Pastor's BLOG. Bookmark the permalink.